Selvedge Seam (Not What You Think)

As always, it has been a busy week.  Our website is improving day by day.  I can't wait until we can do the change.  I just found out today our @tkga.org emails can be activated.  We started our fundraising.  We'd originally planned to do a GoFundMe or something like that but all of those services charge a pretty high fee for collecting the money so our computer guys found us something better that doesn't charge fee Click and Pledge for TKGA.  It immediately sends the form for taxes.  We haven't really advertised this yet and are getting donation.

STUDENT NEWS
I've always noticed I get more lessons to review in the fall and this year is no different.  I seem to get a new lesson every day.

TIP OF THE WEEK
This week's tip was prompted by Binka Schwan, the Vice President of Education for the new TKGA.  She has created a new series for Cast On, Skill Builder, which is designed for newer knitters but I think anyone could benefit from this series.  It will be accompanied by the Confident Beginner patterns.  Her first design is a chunky scarf with optional pockets.  She sent me the pattern which had lengthy instructions for seaming the pockets.  I offered to do a video for the technique.

Well, I spent quite a bit of time on this yesterday.  I tend to think I've seen almost everything but I'd not run across this technique before and I found written directions confusing.  This was not Binka's fault.  It is just something very hard to describe with words.

The pockets for the scarf are folder over and then seamed.  I assumed it was some sort of running or back stitch and I couldn't force Binka's instruction to do what I thought they should do.  She pointed me in the right direction...The Principles of Knitting by June Hemmons Hiatt.  If you haven't encountered this book before, prepare yourself.  There is pretty much nothing you can do in knitting that she doesn't cover.  Unfortunately, the names she gives things are not found anywhere else which makes it difficult to use.  For example, she calls the mattress stitch the running stitch and if you've embroidered or done hand sewing, the running stitch doesn't have much in common with the mattress stitch.

Anyway, this is a technique Hiatt calls Selvedge Seam.  It is used when you want the selvedges stitches to be on the outside of the piece rather than on the inside as they would be if you used mattress stitch.  I have never used this before.  She recommends using is when seaming garments with bulky yarns.  I can't see myself doing this.  Selvedge stitches are ugly so why would you want them on the outside?  The other use fits perfectly for Binka's project.  If you have slipped the first stitch of every row you get a decorative chain and you can use the selvedge seams to join the two pieces and the seam can be decorative.   The photo shows a swatch I knit it up (NOT BINKA'S pattern) . 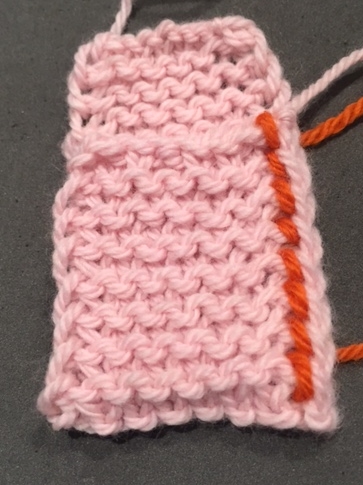 When you use the mattress stitch technique you have the two pieces side by side and when you pull the seaming thread tight, the selvedge is turned to the inside of the piece.  With this technique the two pieces you are seaming are on top of each other.

I was making this much more difficult than it is when a light went off and I realized that the procedure is worked just like the mattress stitch but from top to bottom rather from side to side.

This photo shows the seam from the side so you can see the path of the yarn. 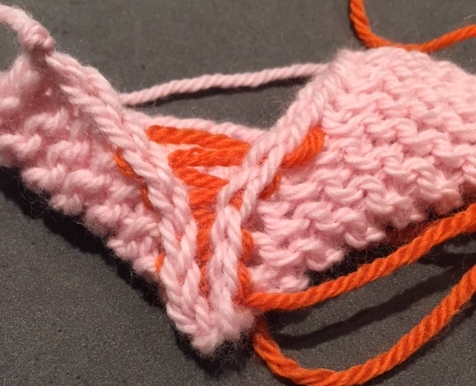 I'm not going to write directions for how to do this.  You really need to see it.  Selvedge Seam

CURRENT PROJECTS
I finished the shawl, blocked it and wove in the ends. 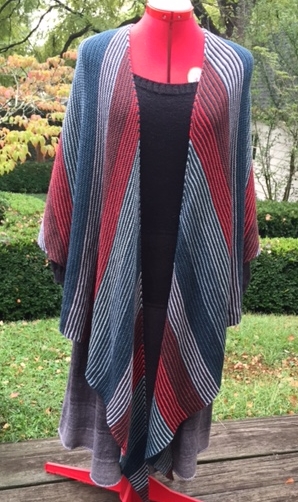 Here it is wrapped around. 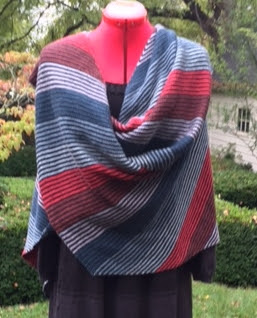 And how it looks from the back. 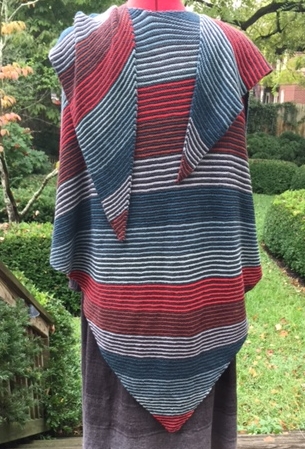 I also finished up vest.  It is a reworking of something I did for Cast On in 2009. Many knitters used that pattern for Level 2 of the Masters and there were several things wrong with it for that purpose.  I changed it.  I haven't done the final finishing yet. 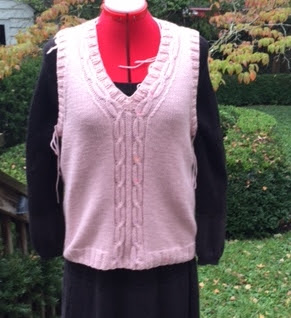 Now I'm working on a scarf version of the shawl.  I'm almost done.

Posted by Arenda Holladay at 3:46 PM