I was in San Jose last week at TNNA.  Here's a photo of Anzula's booth.  You can see Celia trying to figure out what I am doing.  In the foreground you can see their new bulky yarn, Burly.  Celia joined me at the show.  We had a great time.  Getting home was a major thrash.  You wouldn't think that a flight leaving at 1pm would be a red eye but that is what it turned out to be.  Due to bad weather in Georgia, I didn't get home until 5am. 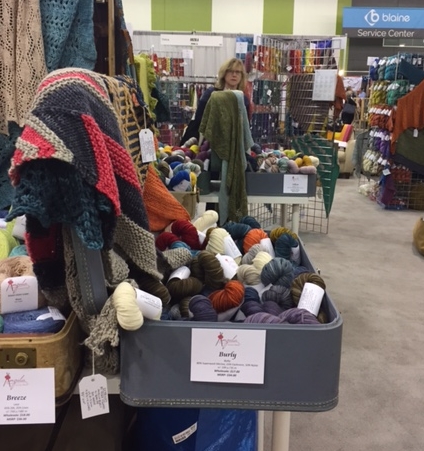 STUDENT NEWS
A couple of lessons were waiting for me when I got home but it didn't take me long to get caught up.  I spent most of the week ordering yarn for the next issue of Cast On.  It is a very time consuming process so I was glad I didn't receive a glut.

TIP OF THE WEEK
I reviewed several lessons which inspired this weeks topic.  I've said it before that when it comes to weaving in yarn tails using the duplicate stitch method, you either see it immediately or you really have to work at it.  As a reminder, the duplicate stitch method works very well for stockinette stitch as the yarn tail has the same elasticity as the surrounding stitches, it doesn't show through to the RS and it doesn't pull free.  Most other methods don't do this.  I've worked a swatch that has several different things I've seen in swatches lately.   #1 shows a technique I saw in a lesson.  The knitter was attempting the duplicate stitch but didn't quite get it.  #4 and #5 are something you see in quite a few references.  The tail is run diagonally through the stitches.  It is elastic but it does show through.  #2 shows duplicate stitch done correctly but rather than slightly split the stitches on the WS, the needle has gone under the stitches completely as you would for decorative duplicate stitch.  #3 is where the yarn is split. 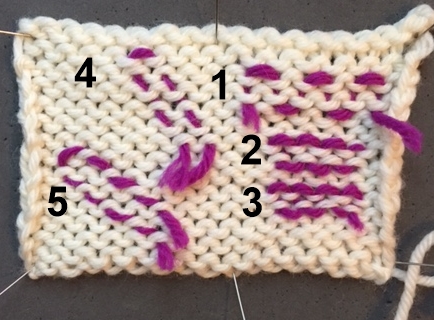 And here is how the various techniques look on the RS.  If your yarn tail is the same color as the rest of the yarn, the bleed through isn't the end of the world but it does look tacky.  Notice that #2 doesn't look terrible but there is some bleed through.  You don't see any purple on #3. 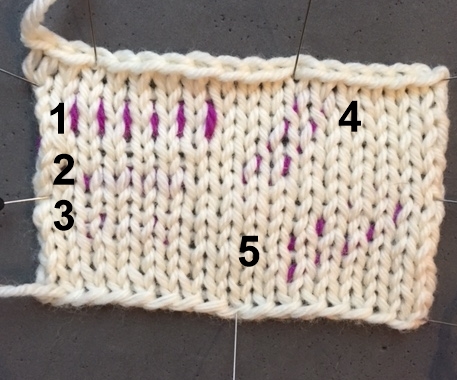 For students that are having a tough time with this, I recommend working a swatch like the one below. 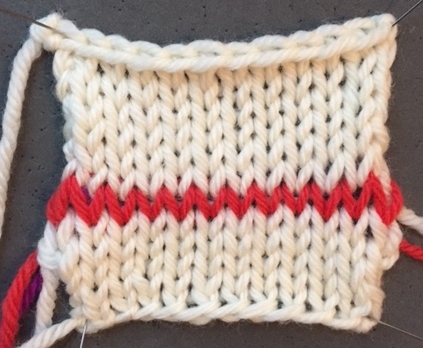 The one row in a different color can help you see the true path of the yarn on the WS as this photograph shows.  The video shows the technique in more detail.  There are also LOTS of blog entries on this topic.  Check the index.  Duplicate Stitch 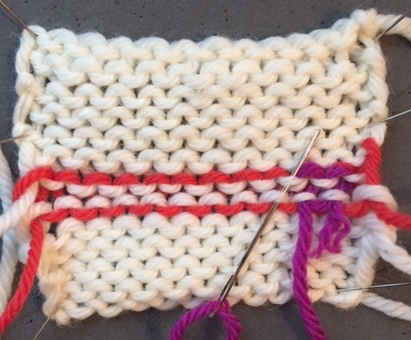 KNITTING SALON
Salon will be on Sunday from 1:30-3:20.  The Spalding donuts were a hit last time.  This time I have all the goodies I picked up at TNNA.  I love that they are doing Cash and Carry now, not that I need more yarn!

CURRENT PROJECTS
I finished up a hat for the KAL.  I quite like it.  I still have yarn left so I might make another one while I am waiting for my Cast On yarn to come.  I also wound up knitting several hats for non-knitting friends.  I forgot to get photos, alas. 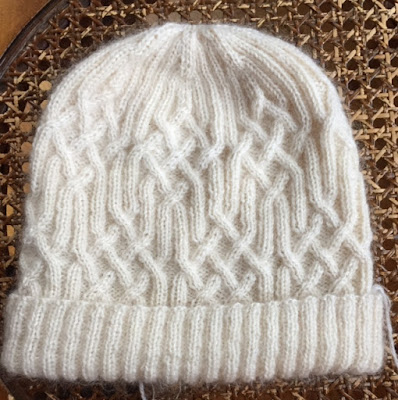 I'm almost finished with Jan's B-day present, VERY LATE.  She made a resolution this year to start wearing colored things.  This falls into that category!  I designed these socks eons ago.  I called them Leaves of Spring which could describe the color as well! 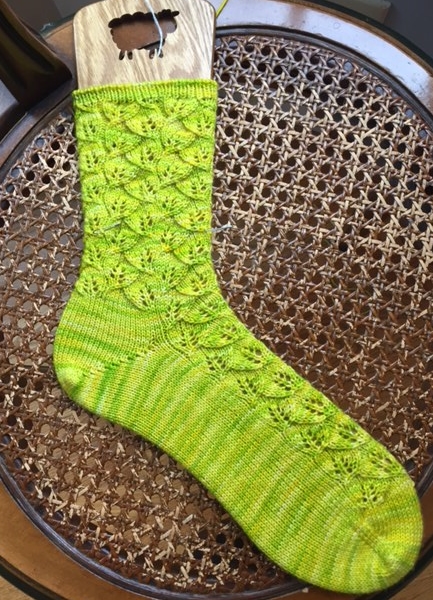 Things have been fairly quiet the past two weeks, the calm before the storm.  Today is the deadline for the Spring Cast On submissions so next week we will be making the selections.  Then I leave on Friday for TNNA.  I'm only staying until Sunday morning.

It has been awhile since I've posted any cat photos.  Here is one of George lounging on this sofa. 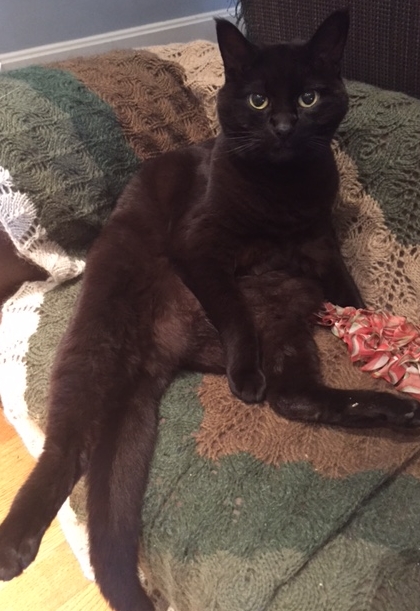 He was miffed to be disturbed.

STUDENT NEWS
My students are slowly getting back to their class knitting.  I've received several lessons this week. I really like our new ordering system.  It works much better than the way the management company did things.  Students get the first lesson immediately.

TIP OF THE WEEK
While I was on hiatus I got an email from someone wanting to know if there was a loose cast on for a lace project.  I didn't have time then to do a post so I'll do it now.  I was doing a lace sweater a few years ago and needed a loose cast on.  Most sources will tell you to use a larger needle for the cast on.  All this does is produce a sloppy first row.  What you want is more space between the stitches, not bigger stitches.  I found a solution in June Hemmons Hiatt's Principles of Knitting.   Knitters either love or hate this book.  It is very comprehensive but Hiatt does not use traditional terminology to describe techniques and her terminology can be very confusing.  Anyway, she has a technique cast on that produced exactly what I wanted.  She calls it the Double Needle Cast On and she includes in both editions.  The section in the new edition is much longer.  It took me quite a while to decipher her description but I finally got it.

You need two needles of different sizes.  One should be the project needle and the other should be at least two sizes smaller.  There is NO WAY I will attempt to describe how to do this.  Watch the video. Double Needle Cast On It is basically a variant of the long tail cast on but you loop the yarn on the smaller needle as well.  Here is how it looks in progress.

The thing that really confused me in the first edition is that when you have both loops on the needle you twist the needles clockwise while holding the yarn tightly.  She doesn't explain why this is a necessary step.  In the second edition she does give an explanation.  It locks the cast on loops.  Here is what it looks like on the back.  (I have a photo later where this isn't done.) 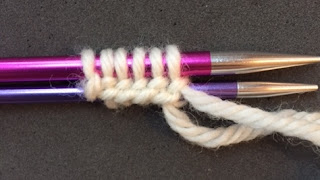 Here is the final product.  It is a neat looking cast on. 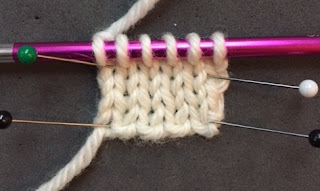 This photo shows why you would want to use this.  I've stretched I.  Notice the extra space between the stitches.  This makes it perfect for a scalloped edge. I've used it for the base row for entrelac as well. 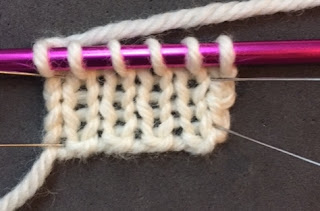 This photo shows what the cast on look likes if you don't do the clockwise twist.  The edge is REALLY large.  There still is a lot of space between the stitches as well.  In the second edition, Hiatt says is you do the twist on a regular long tail cast on, it gives you a bit of a picot edge.  Try it and see what you think! 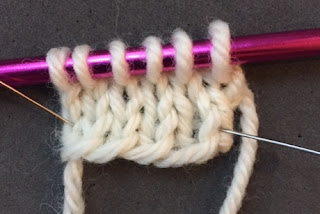 KNITTING SALON
Salon will be on Sunday from 2-4pm.  I plan on making an early morning run to Spalding Donuts as incentive in this lousy weather.  If you are ever in Lexington, don't miss Spaldings.


CURRENT PROJECTS
Mary Beth, our Treasurer started a KAL on Ravelry--TKGA's KAL.  I'm doing Shed the Baggage.  I am pretty good at keeping my stash at controllable levels but I have a tendency to hang onto luxury yarns...saving them for something special.  I'm using the KAL to clean them out.  I had two skeins of Miss Bab's Sojourn I got at a show a billion years ago.  I needed a replacement Buff (my husband appropriated mine).  I figured this one will be safe from him. 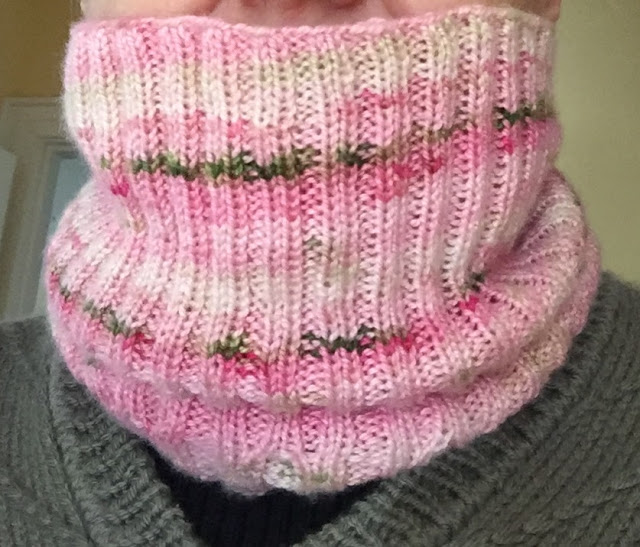 I used the other skein to make one for my niece who is a equine vet for the start of foaling season (lots of nights spent in barns.)  I love the pattern the yarn made. 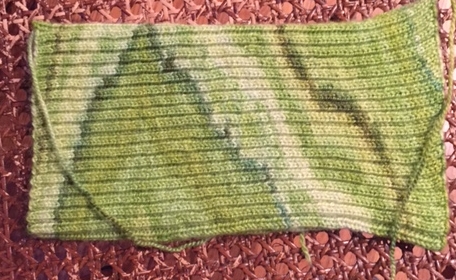 Then I dug into the bag of Richesse et Soi from Knit One Crochet Two.  When this yarn was discontinued I bought all that Patternworks had (mostly white).  I've used some of it over the years but I still have about 20 skeins.  I'm going to see how much I can use up.  Up first, texting gloves. 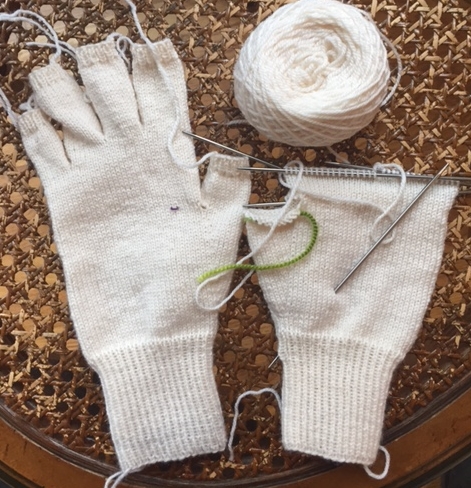 I'm going to continue using it up until I start on my Cast On stuff.
Posted by Arenda Holladay at 1:26 PM 2 comments: