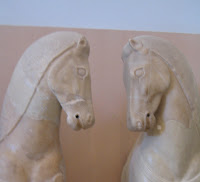 I've been lucky enough to make my hobby my profession but it took a while to get here.   My education in Classics certainly didn't prepare me for this job (although I've always felt if you can learn ancient Greek you can learn pretty much anything) but my "work" experience as a technical writer, instructional designer and computer trainer certainly helped.  Even my volunteer work as a stage manager for a ballet company has provided useful.  If you can manage an IATSE crew while wrangling costumed children and hysterical parents as the curtain goes up for The Nutcracker, you can handle any problems that may arise in a knitting class....

Like so many growing up in Salt Lake City, Utah in the 1950s, I learned to knit (as well as embroider, crochet and quilt) as a child but I didn't start knitting obsessively until the 1980s when I needed a way to relieve stress from my job and to come up with endless baby presents.  The arrival of my own children (two daughters) further sparked my obsession, not only to make cute things for them but to preserve their lives.  Did I mention I knit as a stress reducer?

I became involved with TKGA's Master Knitting Program when we moved to Lexington, KY from Washington, DC.  My career as a training consultant to govermental agencies and corporations was no longer practical so I turned my time to knitting and volunteering.  One thing led to another and to sum up, I  became a Master Knitter in 2000, joined the Master Committee which reviews the work of those going through the program.

In November 2016 the management company that owned TKGA planned to dissolve the organization. Several members of the Master Committee and myself decided takeover TKGA and make it a non-profit.  I'm now the president of the board and the editor of Cast On, which has been digital only since the Winter 2016-2017 issue.