Seaming the CO and BO Edges

If you are a subscriber to my YouTube channel where I have stored the videos for this blog, you did not get a notice that I had uploaded a new video.  I have been involved in a major time suck with Google.  I cannot access that channel anymore.  It doesn't recognize me as the owner so I can't upload to it.  I do have another channel where I uploaded videos relating to Cast On magazine.  I've looked at about a million "help" screens on how to be able to access that channel and nothing has worked.  The fault is mine for having two channels and multiple email addresses.  Apparently, it confused Google.  Anyway, rather than take anymore time with this I am just going to use the other channel from now.  The videos are still there (thank you very much Google) but I no longer get the emails for comments to it.  You will have to subscribe to the new channel, alas.

STUDENT NEWS
I was out of town last week but only one lesson arrived which I will get to today.  We took a short tour of the Midwest starting in Fort Collins, CO.  Unfortunately we go there too late and left too early in the morning to go to the Loopy Ewe.  We drove to Lincoln, NE and spent the night near the university.  The next day we drove to Clear Lake, IA (by way of Iowa State).  Then onto Milwaukee by way of Madison.  We hadn't planned on making it a college tour but it sort of turned out that way.  We had a wonderful time, especially in Milwaukee.  What a great city!

TIP OF THE WEEK
This tip was a special request.  In Level 2 of the Masters Program you have to seam a variety of stitch patterns and the Figure 8 join is required to begin the seam.  This causes all sorts of problems.  Leslie Gonzalez, one of the Co-Chairs has done a wonderful blog on the topic but the question I had was more about exactly where to start and end.  Here is the link to Leslie's blog:  Leslie's Figure 8 Join Blog Entry.

If you look closely at the cast on edge in the space between the selvedge stitch and the next stitch (this assumes you are using the long tail cast on which is required in the Masters Program) you will see that it consists of two strands of yarn.  The first strand is at the very bottom and the second strand connects to the first row of stitches.  It can be hard to see.  When you start the Figure 8 join, you have the choice to begin above these two strands or between the two strands.  I generally start between the two strands.  In the photo below you can see I have done this.  By the way, I used gigantic needles to knit these swatches so that the stitches would be easier to see. 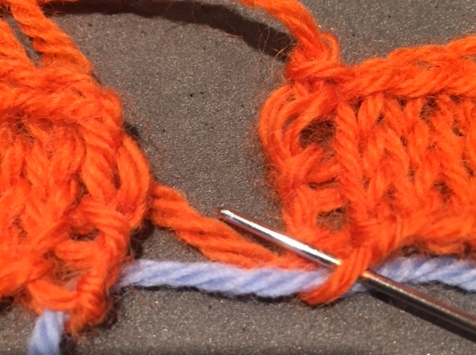 As a reminder, to do a Figure 8 join, you bring the needle up from the bottom to top either at the cast on edge on one side and then do the same on the other side.  You finish it off by bringing the needle up from bottom to top again in the EXACT same spot where you began.  The most common mistake is to start the mattress stitch on the first piece by inserting the needle from top to bottom and catching the first horizontal bar on the right side.  Remember, the mattress stitch takes THREE steps, not two.

Here is the completed Figure 8.  I then would begin the mattress stitch using that second strand of the cast on edge.  Again, I could have started above the two cast on strands. 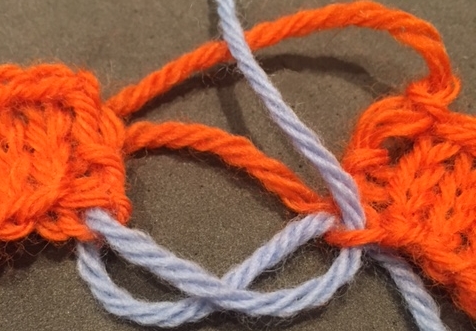 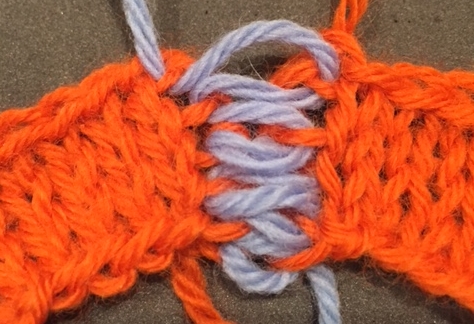 In the video I did for this tip, I show where to begin on both the smooth side and the bumpy side of the CO as it can look a little different.  Here is the video:  Seaming the CO and BO Edges.

was out of town last week but only one lesson arrived which I will get to today.  We took a short tour of the Midwest starting in Fort Collins, CO.  Unfortunately we go there too late and left too early

CURRENT PROJECTS
The chevron shawl is taking much less time than I thought!  I am almost done.  It is all wrinkled up as I had it stuffed in a backpack on my trip and I haven't woven in any edges.  The colors are pretty correct but they are much more vibrant in person.  Here is the back: 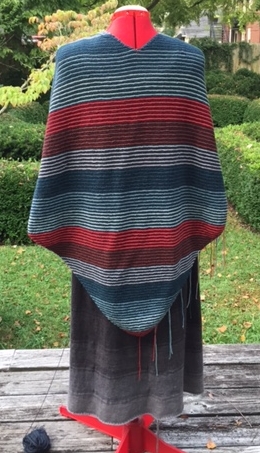 Here is the front.  There is a decrease every ridge at the neck edge so it is getting smaller and smaller.  I hope to finish it this week. 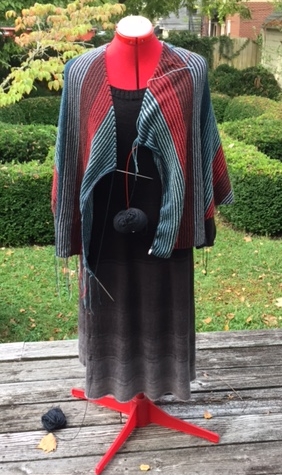 Posted by Arenda Holladay at 11:29 AM