I must be living right...  I thought my computer had decided it had had quite enough and refused to turn on.  Of course, I had not backed up my working files for quite some time.  I do have PDF copies of all of my course handouts.  Luckily, it was just a glitch so I spent a few days meticulously doing backups.  I think it is time to upgrade anyway...better to do it when I am not in a crisis mode.

When I started this blog I indicated I would have the obligatory photos of my cats and I have been very neglectful.  Here is George. 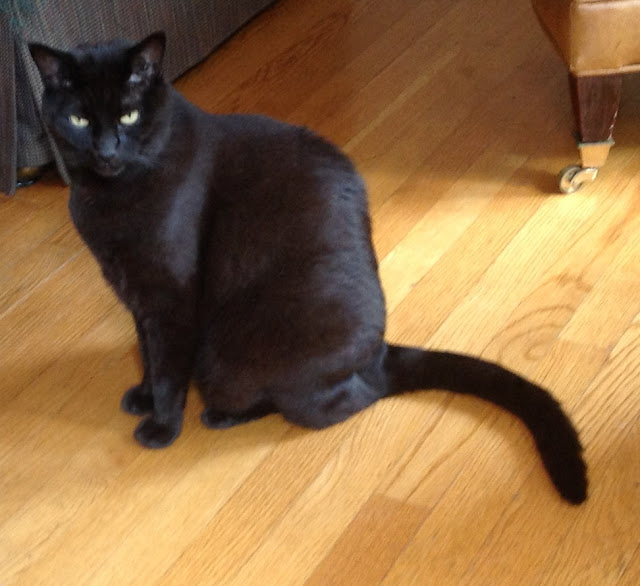 You can't see what he is staring at so intently.  He was looking at Petipa. 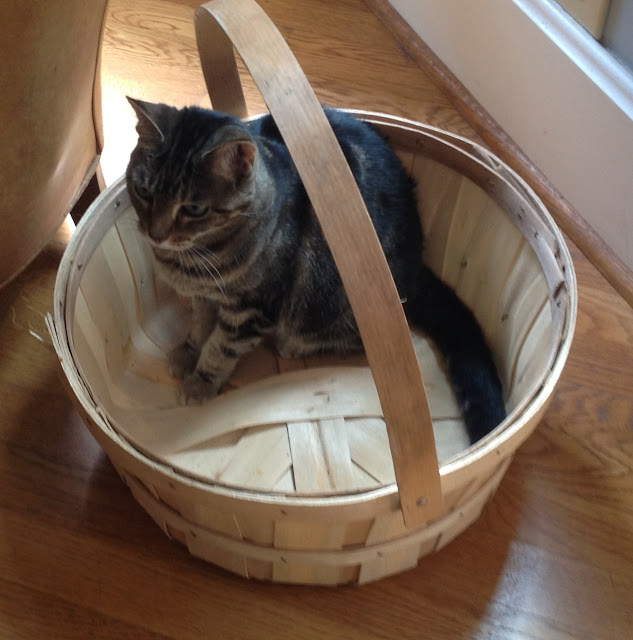 She is giving him the evil eye as well.  Her new favorite place to hang out is the basket which a very nice house guest brought filled with farm fresh goodies.  Maybe I should knit her a cushion for it.

STUDENT NEWS
It was a very slow week until yesterday (which was a good thing since I was having computer problems).  I expect that things will pick up after Labor Day.

TIP OF THE WEEK
I decided to do a tip about a variation of the eyelet buttonhole as I had already done a video a while ago for a student.  (Computer Problems, Again.)  This variation produces a larger buttonhole that the standard eyelet and can be used in any stitch pattern.  I show it in stockinette.  In an upcoming tip I will show it in K2P2 ribbing which requires a bit more planning.  (By the way, there are a lot of variations of the eyelet.  I am just going to cover the ones I do in my course.)

Working this buttonhole is easy.  You work up to two stitches before the location for the buttonhole.  You work a K2tog, then a double yarnover, then an SSK.  The tricky part is on the next row.  Generally buttonholes are worked flat.  I can only thing of a couple of instances where you might work them in the round...perhaps a pillow where you wanted a buttonhole closing at the top?  Anyway, since they are worked flat, you generally start them on a RS row.  What you have to do next is worked on a WS row which complicates the process.

In the standard instructions for this buttonhole, you knit into the first yarnover and then purl into the back (basically a bar increase).  As soon as you knit into the front of the yarnover, it more or less becomes one big yarnover which can cause some confusion.  Remember you are on the WS of the work so when you knit the first yarnover, it is a purl on the RS.  The purl stitch you make on the WS is a knit on the RS.  For some reason, I really don't like the way this looks.  I don't know why this should matter as it is a buttonhole but it does.  What I prefer to do is to work an M1R and M1L (as shown in the photograph). It produces a better looking buttonhole. Is this necessary?  Absolutely not!

One of the students taking my Finishing Course suggested I do a tip of the week about purlside increases.  I've done one on purlside decreases so I will probably do this next week (computer willing!).  These aren't difficult.  Basically you just work the increases as a purl instead of a knit but I will go into more detail when I do the tip.

Here is the link to the video:  Eyelet Buttonhole--Variation 1 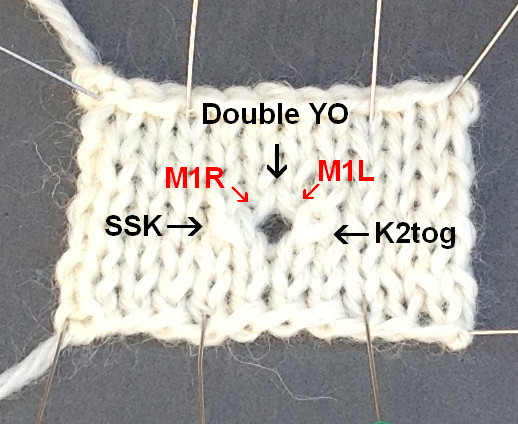 CURRENT PROJECTS
I am making progress on my Pepe Le Pew skirt.  I'd like to have it done in time to wear at the meeting in Charlotte.  That shouldn't be a problem.  Nothing makes you want to go on a diet more than knitting a skirt from side-to-side! 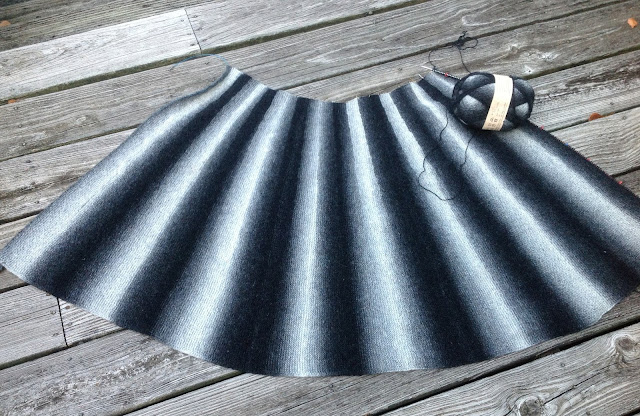 I put together my proposals for the Spring issue of Cast On.  The selection meeting is next Friday.