As predicted, I've spent the last two weeks acquiring yarn for the designers of the Fall issue of Cast On.  Of all of the things I now do for the magazine, this is the one that has surprised me the most.  It takes so much time!  I'm still waiting to hear from two companies.  Since TNNA is just a few weeks away I think they may be preparing for it.  Since they've added Cash and Carry to the event, many companies haul a lot of yarn to Columbus.


STUDENT NEWS
I didn't get that many lessons to review but I did get my first MiniCourse lesson.  I don't teach many but I did develop one last January for knitting Fair Isle Flat.  I only developed this class to answer the questions I get about how to do it since it is my preference.  More about that under Current Projects.

TIP OF THE WEEK
I have successfully avoided this topic for years for a variety of reasons.  First of all, I find teaching grafting (or Kitchener Stitch) to be a pain.  I've never found a great way to explain it.  Some students get the whole Knit Off Purl On, Purl Off Knit On thing but many don't.  Then there is my general dissatisfaction with the results of grafting in pattern when using it on two separate pieces.  (A bit of a side note...I can spend hours and hours trying to find a solution to a knitting problem that can not be solved.  For example, when I knit my first sweater I had trouble getting over the fact that the armhole on the right side was longer since you bind off on the RS of the back and on the left side you bind off on the WS.   I eventually got over this.)

I put grafting in pattern in that same category since it always results in a half stitch offset which just drives me crazy.  (This applies only when grafting two pieces knit separately. There is a different technique for something worked in one piece.)  I was working on a birthday gift that required grafting in pattern and I stumbled across a video that had the clearest and simplest description of grafting I'd ever encountered.  Jodie Gordon Lucas has a video in her website which I think will click for many knitters.  (QueenieKnits).   It covers any combination of stitches you might encounter (except for K1P1 ribbing or garter which are special cases).

Note the length of the paragraph above.  It is short.  That is why I like this method.  It is so simple and easy to remember.  Here is my video:  Grafting in Pattern

Now for the disclaimers about grafting in pattern.  I can't say I've done a ton of research on the topic but most do not mention at all the half stitch offset.  TECHknitter is the exception.  Just how big of a deal is this?  Well, most of the time you are grafting in pattern you are working with some sort of cable pattern or ribbing.  The good news is that the texture of cables and ribbing tend to hide those nasty offsets.  If you look at the photos below you can see that the offset isn't visible in the first.  You only see it in the second if it is stretched.

In an actual project it is barely noticeable.

As I said above, two stitch patterns which require special handling in grafting are K1P1 ribbing and garter.  I'll do a video in my next entry on K1P1 ribbing.  I'll get to an entry on grafting a provisional cast on edge to the top edge at some point.

CURRENT PROJECTS
I finished up another birthday present (except for weaving in yarn tails.) 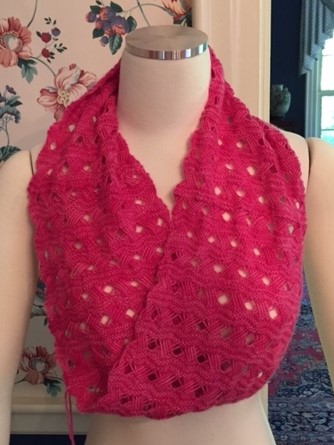 I love this stitch pattern. 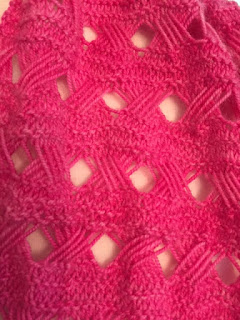 I'm finally getting a start on my project for Cast On.  I'm using RedFish 3 ply and size 2.25mm needles.  This is the bottom border.  Beehives are above the bees.  The colors will reverse for the top part of the sweater and the bee design will change.  The honeycombs will interlock.  The photograph doesn't do the colors justice.  I'm knitting this flat as I find it easier to maintain good tension on the floats. 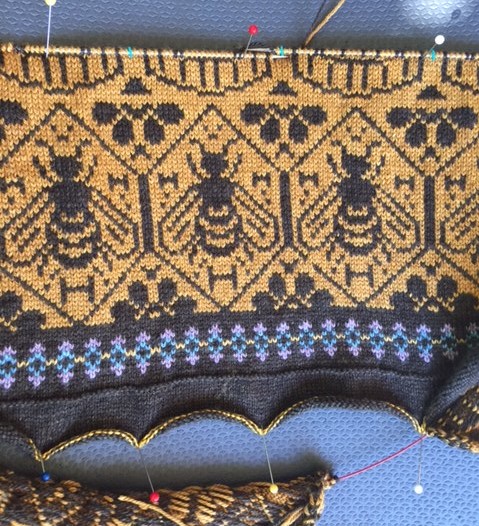 Posted by Arenda Holladay at 10:48 AM