I haven't had the obligatory cat photo for quite awhile.  I am calling this photo the March Miracle.  My cats don't exactly like each other.  The thing you need to know about his photo is that as much as I like my cats, I would not buy a sofa for them.  One of my daughters ordered this for her first apartment thinking it was a full sized sofa.  She gave it to the cats and they love it. 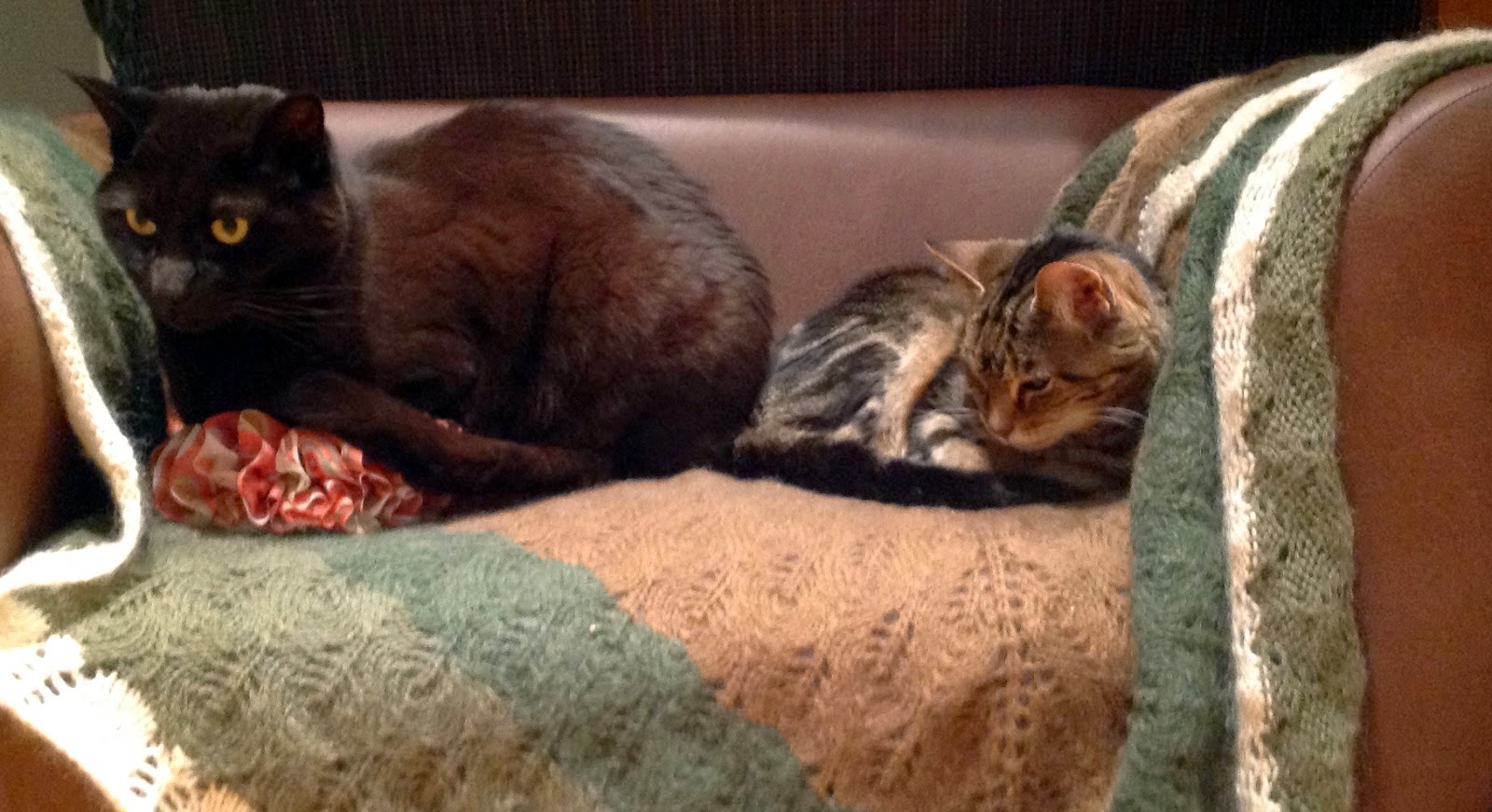 I had a wonderful trip to the Dayton Knitting Guild on Monday to teach.  My blog about the trip is on the TKGA.com website.  If it isn't there yet, it will be soon.

STUDENT NEWS
I didn't get many lessons to review this week but I had lots of emails with questions.  Keep the questions coming.  I am pretty good about responding immediately.


TIP OF THE WEEK
This tip falls into the category of self-serving.  I decided I wanted to do a tubular cast on for the Wine Dark Sea sweater.  I am using Size 0 needles the crochet chain method didn't sound too appealing.  I remembered the last time I did this with Redfish yarns I used Judy's Magic Cast On which I generally use for toe-up socks to do it.  When you do a tubular cast on, most sources tell you to use smaller needles as the tubular cast on tends to stretch out.  This isn't necessary if you use this method.  The resulting cast on is much tighter than other methods I have used.  (If you haven't used Judy's Magic Cast On you may want to check this previous posting:  Judy's Magic Cast On).  This photograph shows the cast on. 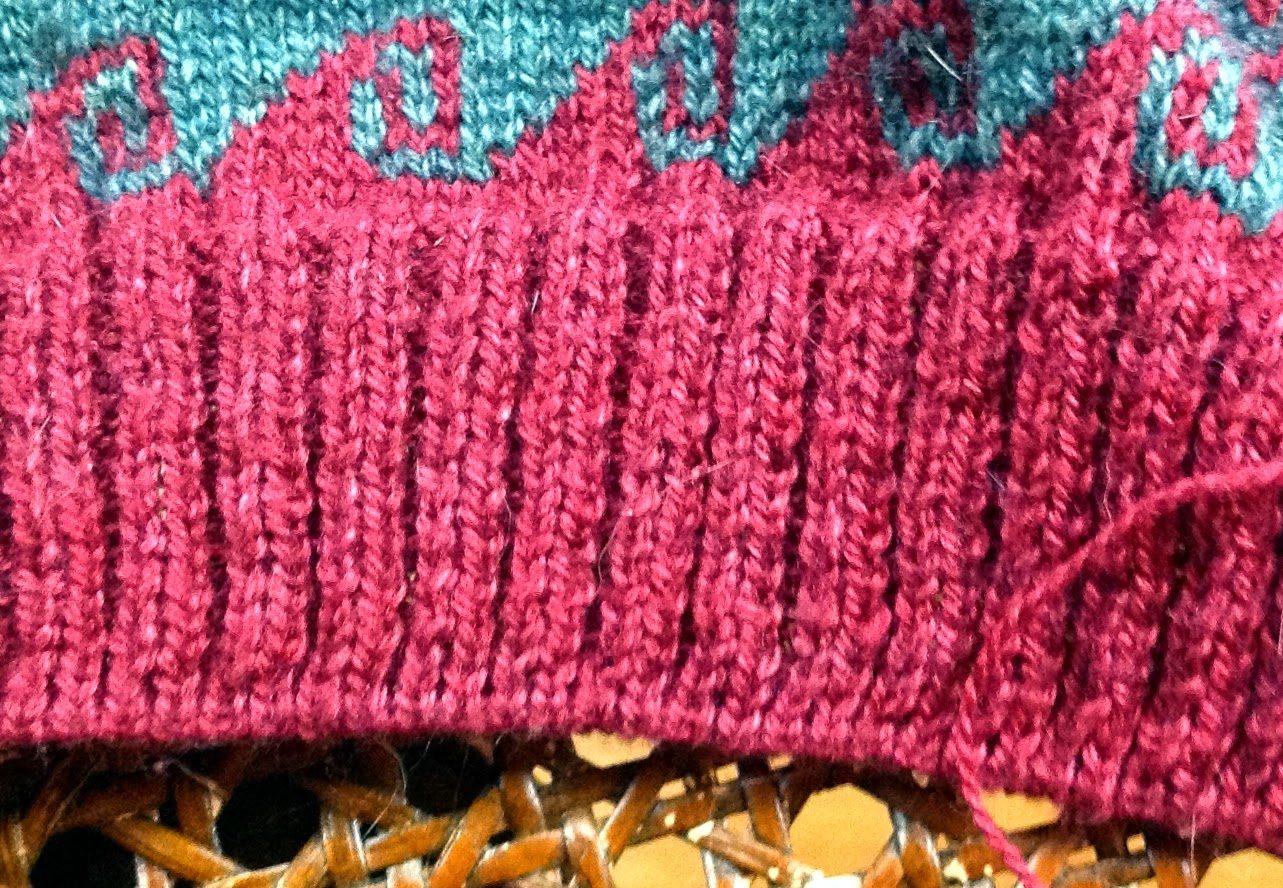 To use Judy's Magic Cast On for a tubular cast on, have half the number of total stitches on each needle.  If you want an uneven number, have one more stitch on one of the needles.  This is what I have done in the photograph below.  (I generally use two circular needles when I am going this for a tubular cast on.  It is less confusing.)

You work two rounds as you would for the toe of a sock.  Notice that there are 7 stitches on one needle and 6 on the other. 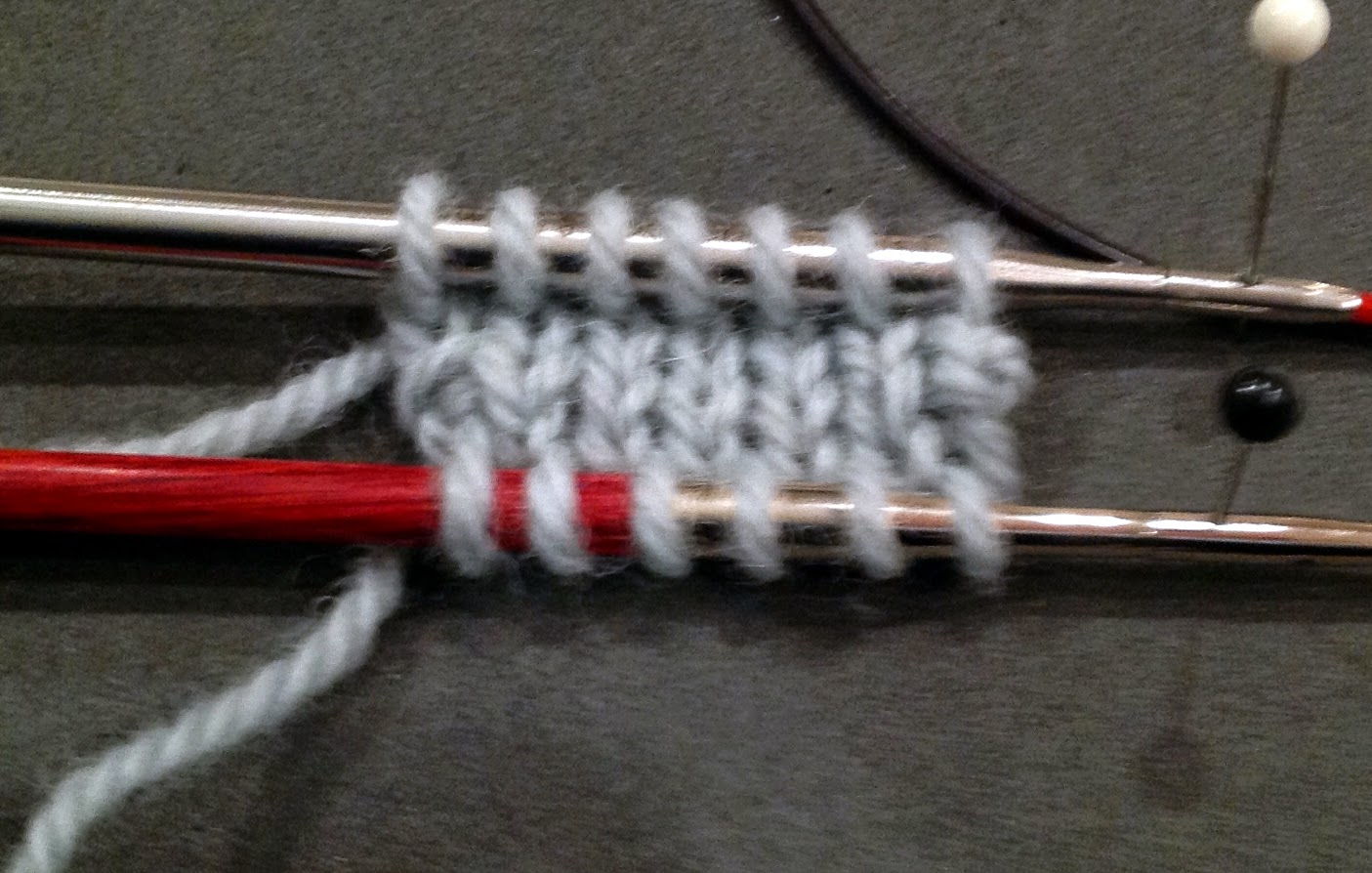 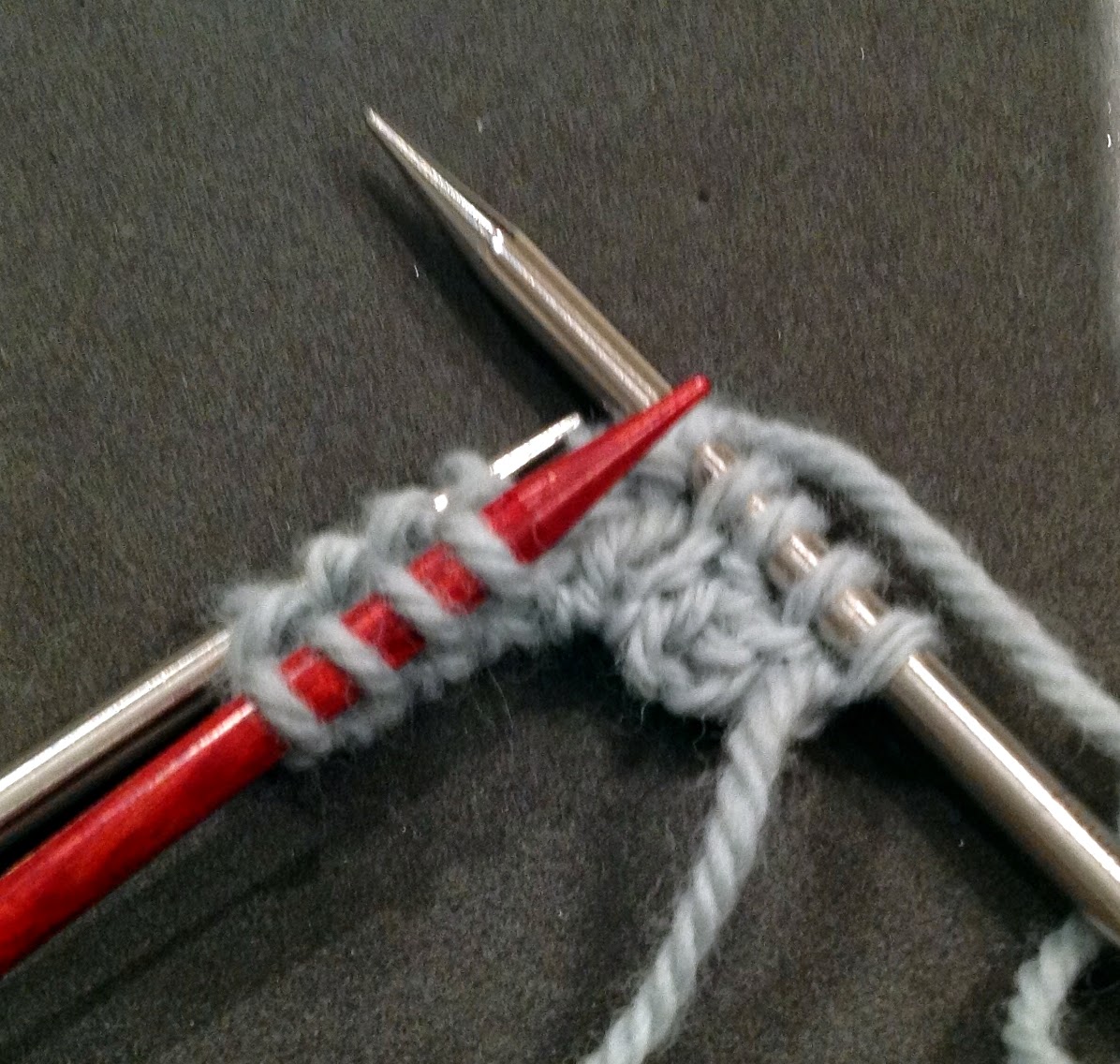 Here is the final product.  Notice how tight the cast on is.  No need for smaller needles.... 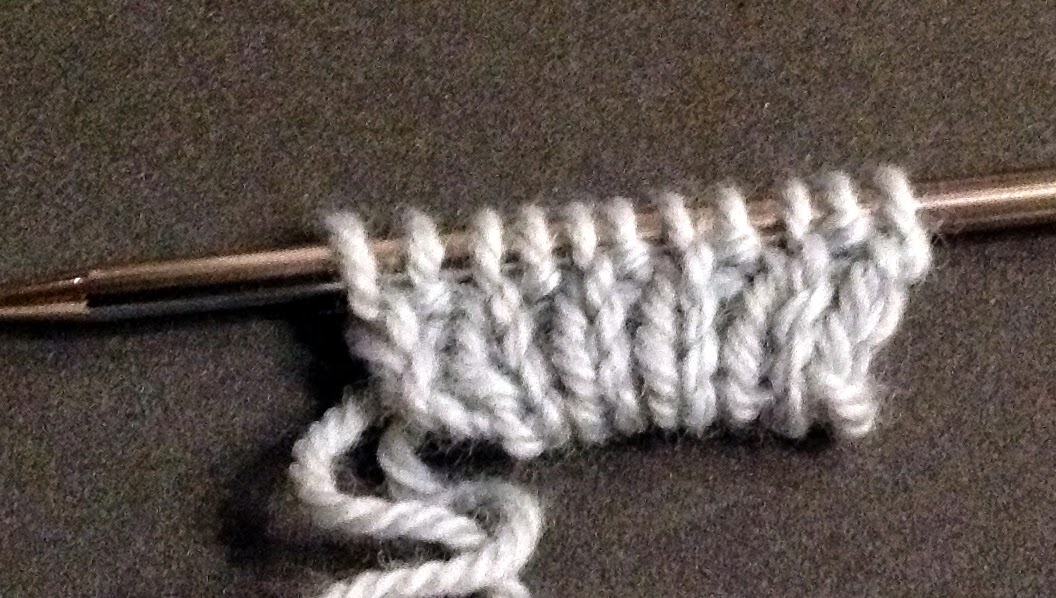 Salon will be on Sunday from 1:30-3:20 and you know why it is on Sunday instead of Saturday!

CURRENT PROJECTS
I am where I was when I decided to start over.  I am MUCH happier with the design. 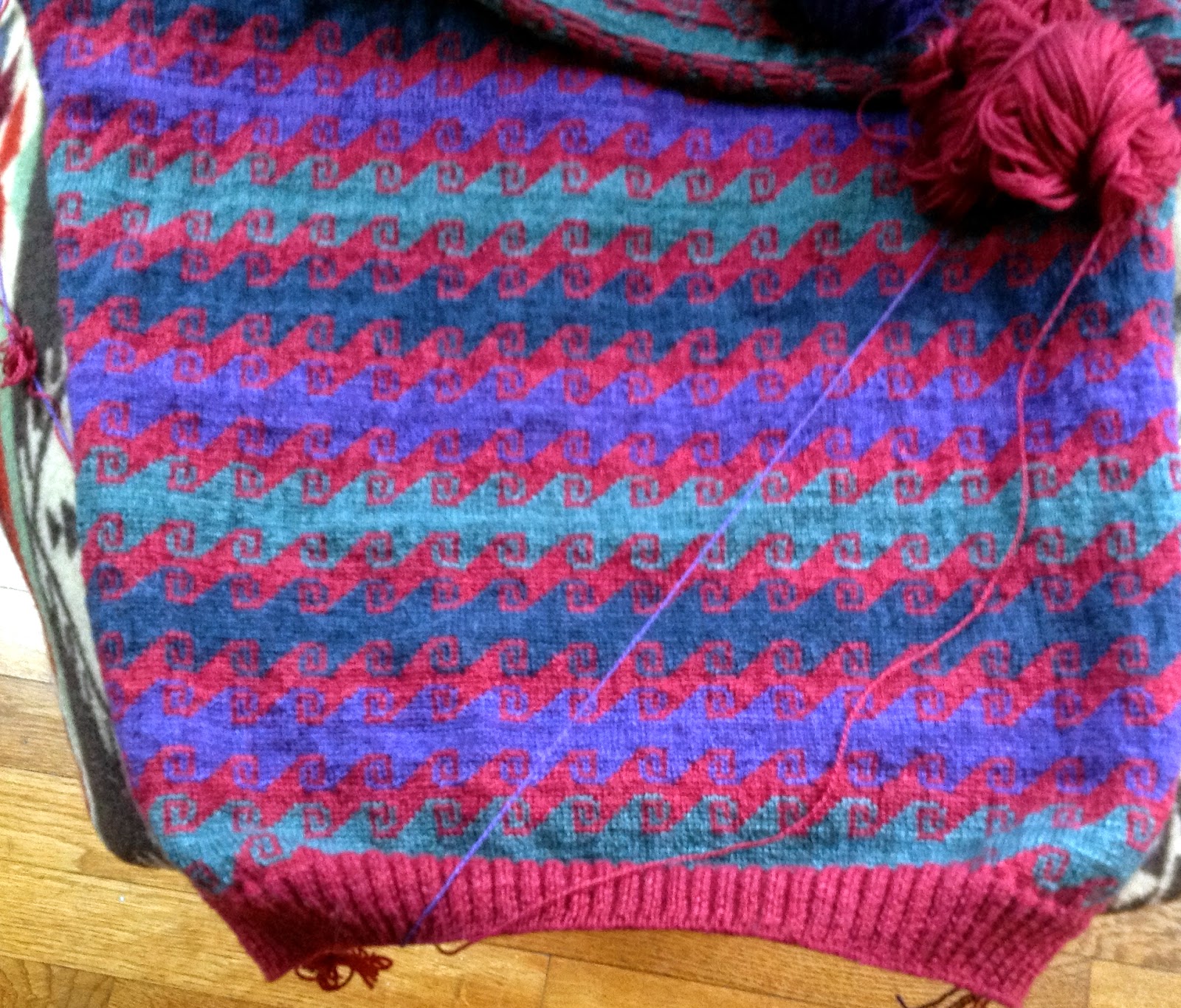 Posted by Arenda Holladay at 2:24 PM