Spring is here and so are my allergies.  Everything is blooming at once.  I've been coughing my way through writing patterns and finishing up the Design Handout.  The hat and mitten sections are finished and the sweater section is almost done...Hopefully, I can finish it this week.

STUDENT NEWS
I reviewed lots of lessons this week.  I am starting to get back lessons for the Finishing Course.  I am enjoying the review process much more than I thought.  When I was reviewing for the Masters Program, I dreaded getting a Level 2 box.  They required so much more work than even Level 3.  I came away from the process knowing that very few knitters know how to finish properly.  I know the reviewers will be thrilled when they get my students' Level 2 work.  I've been VERY impressed.

TIP OF THE WEEK
This week the tip concerns seaming K2P2 ribbing.  Mattress stitch is used to seam K2P2 ribbing.  The problem is configuring the ribbing so that it can be seamed in such a way as to maintain the pattern.

I have seen many patterns where the instructions for K2P2 ribbing is required and it is based on a multiple of four.  That means that the pattern K2P2 is repeated across the row.  It begins with two knit stitches and ends with two purl stitches.  There is no way to seam this properly.  I've had knitters bring their work to me and ask how they can fix it.  Once the pieces are knit, there isn't much you can do other than take it out.

This photograph shows what happens when you try to see K2P2 rib configured this way.  On one side of the seam you will have one purl stitch and on the other you will have one knit.  This just gives the piece a "home made" look rather than "hand made." 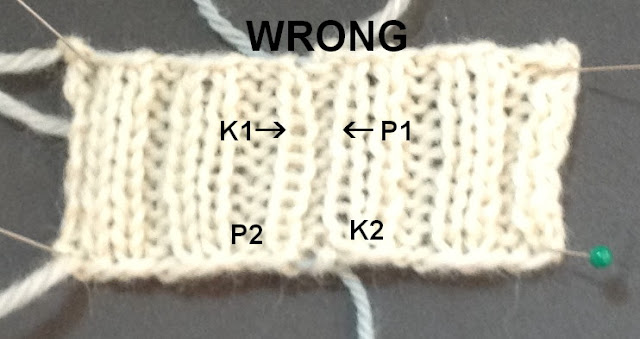 The first thing you need to do when using a pattern that has K2P2 ribbing (and will be seamed) is to check the pattern multiple.  It needs to be a multiple of 4 sts PLUS 2 additional stitches.  (If you look at stitch dictionaries, they frequently show the multiple and then add "plus" and a number of stitches.  The "plus" numbers are what you need if you plan to work the pattern flat.)  The "Plus 2" for K2P2 ribbing is needed for the seam so that the pattern can continue over the seam.

What do you do with a pattern when this is the case?  I generally add two stitches so that the multiple works.  You can always decrease these stitches on the last row of ribbing.

If you have a pattern with a 4 plus 2 multiple, this is generally how  the instructions are written, "*K2, p2; rep from * to last 2 sts, k2".  This is how the resulting seam will look: 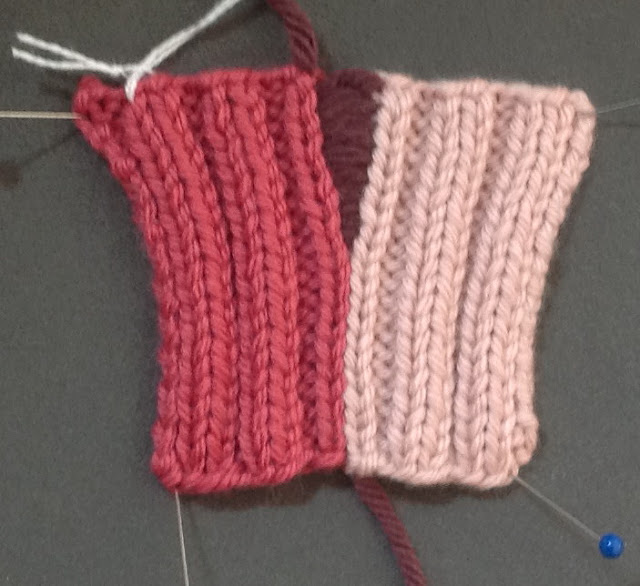 The knit stitch from the end of one piece lines up with the knit stitch at the beginning of the other piece.  Yes, the pattern is continued but there are times this configuration may not be the best solution.  Many knitters have difficulty with their tension a few stitches in from the selvedges.  When these are seamed, the seam is not very attractive.  Also, the two knit stitches at the seam do not have the same appearance and elasticity as the other knit stitches.

Another way you can approach seaming K2P2 ribbing with a multiple of 4 plus 2 is set up the pattern differently on the first row.  I change my K2P2 ribbing first row to " k1, *k2, p2; rep from * to last st, k1."  What I have done is "borrow" one of the knit stitches from the end of the row and placed it at the beginning of the work.  This means that I will have three knit stitches on one side and two purls and one knit at the other.  The seam is placed in the horizontal bars between the selvedge stitch and the next stitch.  Notice the seam in this photograph: 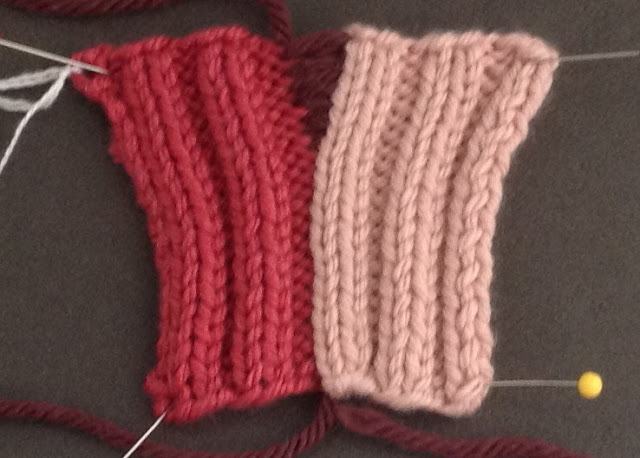 To borrow a term from quilting, the seam in placed in the "ditch" between the knit and purl stitches.  This is the most unobtrusive method.  It does require manipulating the first row of most patterns.  Here is the video:  Seaming K2P2 ribbing


KNITTING SALON
Salon will be on Sunday this week as it is the final Met Simulcast.  It is Handel's Julius Caesar.  The production looks wonderful.  It is set in the British Raj from what I can tell.  Caesar wears a pith helmet.  It doesn't get much better that that.  I love Baroque music.  My piano teacher has to force me to play something other than Bach.


CURRENT PROJECTS
The men's socks and pattern are done.  I redid the ribbing several times.  This is K4P4 ribbing.  I like it better.  I don't have a sock form big enough to block them properly.  I made the largest size mainly to see if two skeins (Brown Sheep Wildefoote) was enough.  It was. 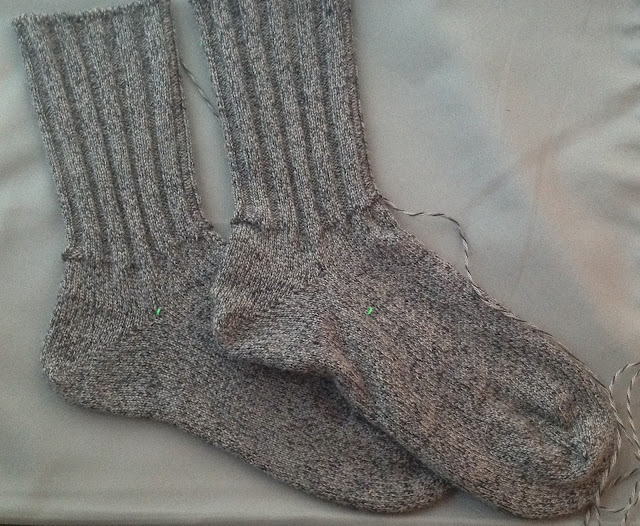 Now I'm working on the FINAL project for the issue.  What was I thinking?  Anyway, I am using leftover Redfish to do a pair of Fair Isle socks.  Although I have tons of Redfish yarn from all of the projects, I decided to limit myself to the colors in the sweater.  I plan to keep these socks. 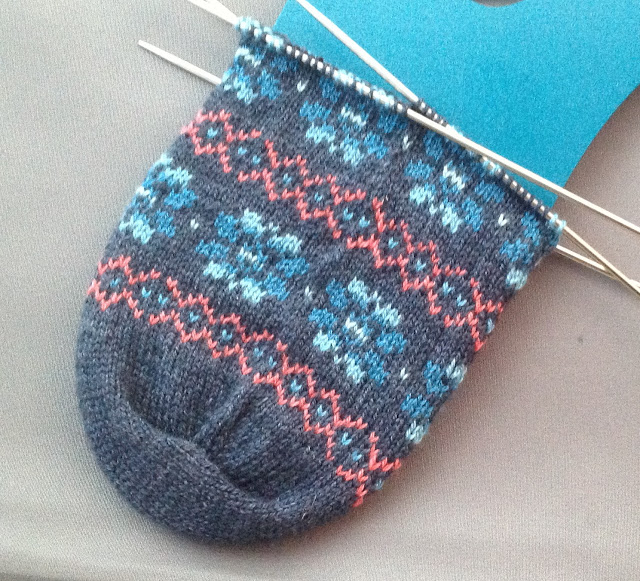 Posted by Arenda Holladay at 10:16 AM